Artists Homes and Studios will be out in book stores in six weeks
making for a belated holiday or a New Year's gift.

Who doesn't enjoy peeking into another artist's creative space, to see where and how they paint? For many it is a very personal space.

Having worked with so many artists in undertaking the 100 New England, Mid-Atlantic, Midwest, Southern, Northwestern, Southwest, and Green Art books, Rooney toured the homes and studios of 86 international artists. Some studios are large, with lovely high ceilings and oversized skylights. Some are modest - even cramped. Some are amazingly pristine and carefully ordered with drawing, painting gallery and meditation zones. Some are a study of chaos, but in all of them the artists appear to create.

She found that today's studios range from chicken coops to entire islands, to extra bedrooms to horse barns. Artists feel strongly about how they organize their studios, where they store their canvases and other works of art, how they keep their brushes and tools, and hang their art. One of the primary differences seems to be whether the artist likes the hubbub of other people and artists about. Some talk about the need for others, while others enjoy the freedom of padding down the hall in their slippers late at night to work on a piece. They want the peace and quiet and the quiet retreat. Others like to be part of a community.

Many talk about their music systems and gardens. Dogs appear to be faithful companions. Many collect natural objects to inspire them. Big or small, tidy or messy, the artist studio is obviously a sanctuary – a place for creative incubation, as Joseph Campbell would say.

The BlackRock Call for Entries for 2016 Gallery Exhibition Proposals is now open. We encourage artists, curators, and coordinators for artist groups, art collectives and arts organizations — who live in Washington, DC, Maryland or Virginia — to apply. The deadline is December 19, 2014.

BlackRock Center for the Arts is currently accepting proposals for solo, themed and group exhibitions to be presented in 2016. Visual artists, independent curators, and coordinators of artist collectives and arts organizations who reside in Maryland, Washington, DC or Virginia are encouraged to submit Exhibition Proposals. BlackRock hosts monthly gallery exhibitions of contemporary art by emerging and established artist working in all media. Proposals will be reviewed by the following panel of three jurors: Jeffry Cudlin, Helen Frederick and Andrea Pollan. The Deadline for submission is Friday, December 19, 2014.

Opening Of Leonard Cohen Photography Exhibit in Soho This Saturday

Morrison Hotel Gallery
116 Prince Street - 2nd Floor
SoHo, NYC 10012
This event is open to the public. Books can be purchased at the signing. 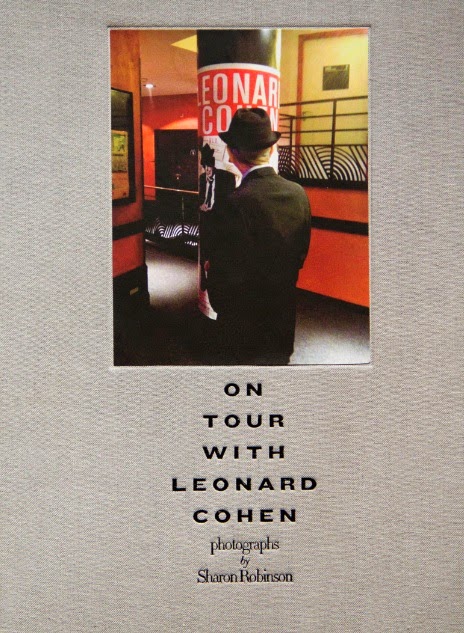 On Saturday, December 13th from 1 to 4 PM at Morrison Hotel Gallery in SoHo, 116 Prince Street, 2nd floor, NYC, Grammy-winning songwriter, and longtime Leonard Cohen creative collaborator, Sharon Robinson will exhibit a fascinating collection of images. On Tour with Leonard Cohen, photographs by Sharon Robinson will showcase profoundly emotional photographs taken from Sharon's iPhone documenting five years of touring with legendary poet, novelist, and singer-songwriter Leonard Cohen. The showcased photos are part of Sharon's mesmerizing new book, On Tour with Leonard Cohen, photographs by Sharon Robinson to be released in December 9th by powerHouse books distributed by Random House. Sharon will be signing copies of her book at her MHG exhibit.


For thirty years, singer-songwriter Sharon Robinson has been associated with Leonard Cohen as a co-writer, producer, and vocalist. She co-wrote and produced Cohen's 2001 album, Ten New Songs (Columbia Records and one of Rolling Stone's "Top 100 Albums of the Decade"), and co-authored the Cohen classics, "Everybody Knows" and "Waiting for the Miracle." A fluidly creative soul, Sharon is also a poetically expressive photographer. Sharon once worked as the staff photographer at the world-famous Coconut Grove nightclub in Los Angeles. Leonard has said of Sharon, that she has "...an eye as fine as her ear."

In 2004, Leonard Cohen's manager stole his life savings, forcing him out of retirement to tour again. Sharon's photos in this exhibit capture five of the six years of this anthemic and vulnerable music journey that became one of the most revered tours in recent music history. The majority of the images were taken with Sharon's iPhone, which was crucial in capturing these images with the warmth and candor so evident in the photography.  Robinson reveals the nitty-gritty of day-to-day life of the road, onstage and behind the scenes, and the chemistry of Cohen and his supporting artists, together on an incredible journey across the globe, their hearts and minds focused on the next show. "I kept my iPhone in my pocket so I could capture a moment in a second. I hope the spontaneous nature of this collection helps to convey how deeply emotional and extremely rewarding this journey was," she says.

These photos have been anthologized in the exquisite book, On Tour with Leonard Cohen, photographs by Sharon. Sharon penned the book's introduction and New York-based author Larry "Ratso" Sloman, best know for his literary associations with Red Hot Chili Peppers vocalist Anthony Kiedis, Howard Stern, Bob Dylan, and Abbie Hoffman, wrote an essay for the foreword. Sharon will be doing a volley of activity in conjunction with the book's release, including book signings and live musical performances. She will appear at Subculture on Saturday, December 12th at 11:30 PM in NYC. In February 2015, Sharon will issue her highly anticipated second solo album, Caffeine.
Sharon Robinson has been associated with Leonard Cohen since touring with him as a singer in 1979-80. A Grammy-winning songwriter, Robinson's work has been covered by artists as diverse as Patti LaBelle, Don Henley, Aaron Neville, and Roberta Flack to name a few. Robinson's solo album, Everybody Knows (2008), garnered wide critical acclaim, as have her recent performances on the Cohen World Tour.

Richard Dana at The Heurich Gallery

Reverberation, Richard Dana’s latest body of work, comprises a new series of large-scale digital pigment prints on view for the first time in this exhibition. These vibrant abstract works are the result of Dana’s distinct process that exploits chance, experimentation, and analog and digital technologies. Dana begins by creating black and white drawings or collages which he then scans into his computer. The digital images are submitted to a series of manipulations – they are bent, stretched, warped, imploded, exploded, massaged, and colored – until any trace of the artist’s hand disappears. Each intervention builds upon the previous one, resulting in a mesmerizing body of images that vibrate with rhythm and color.

Montgomery College’s Department of Visual and Performing Arts presents the 42nd Annual Faculty Exhibition at the King Street Gallery. The exhibit opens December 4th with a reception from 6–8 p.m. This exhibition features faculty and staff artwork in the Visual and Performing Arts department at the Takoma Park/Silver Spring campus of Montgomery College.

The event is located at the Morris and Gwendolyn Cafritz Foundation Arts Center, which houses the gallery. For more information, visit http://cms.montgomerycollege.edu/arts-tpss/exhibitions/.


About The King Street Gallery: The King Street Gallery’s exhibitions serve as a compliment to the academic programs of the Department of Visual Arts and Design, while also bringing art to the community. As part of the Silver Spring arts community, exhibitions focus on current pieces by working artists. The gallery is on the ground floor of The Morris and Gwendolyn Cafritz Foundation Arts Center on the west side of the Takoma Park/Silver Spring Campus. The center is located off of Georgia Avenue at 930 King Street. Parking is available in the West Campus Garage, which is located immediately behind the center.
Posted by Anne Marchand at 12/02/2014 No comments:

I'm reposting an artist studio space locator list in the greater DC area from 2010.  Washington ArtWorks, a new addition,  is a 501(c)(3) nonprofit organization in Rockville that offers art classes, studio space, and gallery exhibitions. Washington ArtWorks is currently expanding and will be opening dozens of new studios in the near future. If anyone has additional resources, I will gladly add them or update old ones, if you send request to painterlyvisions at gmail.com.
------------------------------
Painterly Visions: Artists Studio Spaces in the Greater DC Area: DC doesn't have big warehouses like NY and Baltimore and artists have studios in all kinds of spaces, from home studios to art organizations. An artist recently emailed me about where to find available artist space in the greater Washington DC area. I've started a list of organizations and groups who have artist studios to rent or to share. I've decided to post this for my readers as an expandable resource. You'll need to check with each location about guidelines for their studio spaces.
Let me know of other artist studio spaces you'd like to add to the list, please leave the information in the comments form for review. I will expand the list as time goes on. Here's the beginning and I hope it helps some of you find a great place to work.
Check out DC Space Finder http://www.culturaldc.org/artist-services/dc-space-finder/
Some Artist Studio Spaces in the Greater DC Area:
A. Salon
Art Studios at 52 O Street NW
The Jackson Art Center
Jackson School
3048 1/2 R Street, NW
Georgetown - Washington, DC 20016
www.jacksonartcenter.com
artdc.com Studios
www.artdc.com
Pyramid Atlantic Art Center
Torpedo Factory Art Center
Work House Art Center Lorton
Arlington Art Center
VisArts’(predecessor “Rockville Arts Place”)
http://www.visartscenter.org
Gateway Arts District includes Mt. Rainier Studios
http://www.mountrainiermd.org/arts_district.html
3708 Wells Ave, Mount Rainier, MD 20712
DC Glass Works
www.dcglassworks.com
Brentwood Art Center.
3901 Rhode Island Avenue,
Brentwood, MD 20722