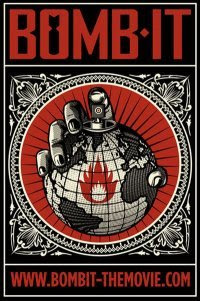 BOMB IT is the explosive documentary from award-winning director Jon Reiss. It investigates the most subversive and controversial art form currently shaping international youth culture: graffiti.

While some believe the roots of graffiti can be traced back to pre-linguistic cave markings and the innate human need for self-expression, graffiti remains a highly controversial issue. Graffiti raises important questions that delve deep into our contemporary social structure such as: Who has the right to express themselves? What is a canvas? Where should art take place? If public space is a forum for discussion, which voices will be heard?

Using a myriad of original interviews from around the world as well as guerilla footage of graffiti writers in action, BOMB IT tells the story of contemporary graffiti from its roots in ancient rock paintings through Picasso to Latino placas through its notorious emergence as a visual adjunct to the rise of hip hop culture in 1970's New York City culminating in its current, varied and highly complex form.

BOMB IT is the most comprehensive documentary about graffiti and street art to date and for years to come.

After the film, you are invited to participate in a forum discussion to discuss: The Art and Crime debate of Graffiti