There’s less than a month left to apply for a VMFA Visual Arts Fellowship!

For a PDF flyer, the application form, and all instructions on how to apply, visit www.VMFA.museum/Fellowships.

Business Supporters Here
Posted by Anne Marchand at 10/13/2013 No comments:

Next up for Anne Marchand Studios?

Forty years ago, the astronauts of Apollo 8 orbited the moon for the first time and snapped the iconic "Blue Marble" photographs of the earth from space. It was not only an image of stunning beauty; it represented a powerful new perspective of earthly life and its place within the cosmos. It produced a radical shift in self-awareness.....

The Overview Effect | KarmaTube
Posted by Anne Marchand at 10/13/2013 No comments:

Anne Marchand
October 2 - 12
We will host a mini exhibition of works by Anne Marchand in our project room in conjunction with the Affordable Art Fair through October 12. Visit our gallery in the Chelsea neighborhood this week!
http://campaign.r20.constantcontact.com/render?llr=hvkmvwbab&v=001TEa7HUw8hRHV3A1GVpoC1V0XL0BTo1E7o5FDdIUqHHXX2h8Sv81d_BG0CEEyPAv34aTe-9N1Wy6yF1ruAmGHJoIabinAcCKXTI80gkqPKTE%3D 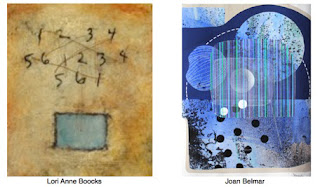 Joan Belmar
In his recent paintings “Territories,” Joan explores psychological and political perspectives through the universality of maps. The series, based on maps from his native Chile, pay homage to the indigenous people who are so rarely referenced in anthropology and cartography. Finding himself suspended between the personal and universal as he rediscovered the maps of his childhood, Joan utilizes symbols, colors, drawings, grids, dots, and lines to search for freedom in a structured world. His works reference a time in our past that is impossible to recreate, but important to remember. Joan Belmar was born in Santiago, Chile and emigrated to Spain where he began to paint professionally. Joan moved to Washington DC in 1999. In 2003 he was granted permanent residency in the U.S. based on extraordinary artistic merit. Joan has shown internationally and in Washington, D.C. In 2009 the DC Commission on the Arts and Humanities awarded him an Artist Fellowship Grant and in 2010 and 2013 he was awarded an Individual Artist grant in Painting from the Maryland Arts Council. This is his second show with Adah Rose Gallery.

Lori Anne Boocks
Lori Anne Boocks is the keeper of stories. The passage of time creates layers of experience through the remembering, misremembering, and forgetting of stories. Each of these moments are important influences on her painting and thinking. In her newest work, text continues to serve as both subject matter and the basis for mark-making. Texture for each piece comes from her hands, brushwork, and a subtractive process where layers of poured washes are added to the surface, then partially removed with cloth. Her exploration of stories hinges on the juxtaposition of multiple directions of depth, including time, space, mathematics, and meaning. Lori Anne Boocks earned a BFA from Old Dominion University in 1992. She has had solo exhibitions at Sitar Arts Center, Studio Gallery and the Delaplaine Visual Arts Center. She was a Semi Finalist in the Bethesda Painting Awards in 2012, awarded a Living Gallery Residency at the Annmarie Arts Center in 2011 and won a first place award at the Festival of the Arts in Portsmouth, VA. This is her second show with Adah Rose Gallery.
Posted by Anne Marchand at 10/03/2013 No comments: