Tonight, a thought provoking discussion on the much discussed, always fun debate.

Join a wonderful panel of Curators, Academics, Artists and Critics:

3. Harriet Lesser, Curator, Strathmore Center for the Arts and Artist


P.S. Please bring your own examples too!!

Free and Open to All

Painterly Visions Blog will no longer be posting with any frequency.  I will be concentrating future blogging at Marchand Studio News  http://marchandstudionewsletter.blogspot.com/. Come over and visit me there.

I'd like to thank my readers for their attention over the past eight years. When I first started blogging in 2005, it was a relatively new phenomenon. My mission was to create a news stream for art happenings in the Washington, DC area to compensate for the lack of news media coverage in the arts at the time. Painterly Visions helped fill a void and joined new voices getting the word out about our city's exciting art scene.

The web is a rich source for communication, with the advent of facebook and twitter along with other bloggers, there is a wealth of information about the art scene available online. My favorites sites, Pink Line Project and Daily Campello News still bring news of the arts to your screen.

Check the blogroll for additional sites that may be of interest. Thank you for the opportunity to connect over the years. It's been a pure labor of love to deliver news about a subject that is so vital and alive. To the artists; keep creating your truth. To the art lovers; keep returning to DC for more. Happy creating!

All the best~  Anne Marchand

A FATAL ADDICTION: War in the Name of God

This controversial book explores what the author calls a “violence of God” tradition which he claims exists in the world’s major religions, even Buddhism. It then examines how this dynamic is turned on its head by political leaders in the United States and other countries, who use spiritual and religious language to sell war to their populations.

The study argues that war is fundamental not only to religious worship but also to human civilization itself. As Thomas Block claims in A Fatal Addiction:

The stability of war as a central facet of society is undeniable. During the 5600 years of recorded history, 14,600 wars have been fought. At the same time, the vast majority of people and societies throughout human time have considered themselves deeply religious. An article in The Washington Post noted that “92 percent [of Americans] believe in God or a universal spirit — including one in five of those who call themselves atheists.” At the same time, however, America has been involved in an unbroken line of military engagements since my birth in 1963, whose dead might count out the minutes that I have lived in the course of nearly 50 years. It was this pairing in contemporary America of war and religion, spirituality and destruction that inspired me to write this book. After all, shouldn’t the one (religion) mitigate the other (institutional violence)?

This book explores the fusion of war and religion throughout history, and then applies the historical knowledge to the contemporary United States. Block reviews specific instances of “holy war” as proposed in the holy books of the major faiths, and illustrates how bellicose, war-like language is used repeatedly to explain and sanction violence as a spiritual quest. He proposes that this intermingling of war and spirituality is employed to prepare the population for the coming of war. In his view, war as spiritual practice appears inevitable, due to this religio-violent education which is woven through all of the principal faith traditions.

In the end, Block asks if God and war define the American spirit as much as apple pie and baseball.
* * * * *
Thomas Block’s nonfiction book, “Shalom/Salaam: A Story of a Mystical Fraternity,” was published in the United States (Fons Vitae, Louisville, KY) and Turkey (Bilim + Gonul, Istanbul) in 2010. His first novel, The Fool Returns, will be published in Turkey in 2012 (Bilim + Gonul, Istanbul). His first play, White Noise, was produced in Washington D.C. by Wanderlust Theater Company in June 2012.

“KISS THE NAME OF THE NINE MUSES GOODBYE” opens tonight in Kensington, MD 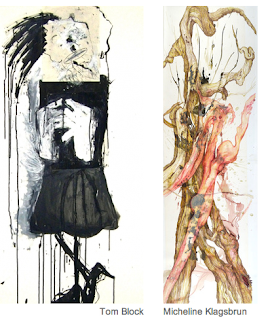 “KISS THE NAME OF THE NINE MUSES GOODBYE”

Tom Block—artist, poet, playwright, and activist—channels all of his roles in his series, “In the Garden of the Mystical Redoubt.”  His form of Neo- expressionism, which incorporates raw energy, art brut, and graphic design, belies a sensitivity to the multitudes of the human condition. Whether through black and white portraiture, abstract mixed-media collage, or text-based work, Mr. Block aims to garner empathy for his subjects who embody the idiosyncrasies and tendencies of humans which are at the same time unique and universal. From the angst of “Suburban Boy” to the exuberance of the “Rock and Roll Mystic,” Mr. Block conveys a range of emotional states which remain essential to his work.


Micheline Klagsbrun finds the inspiration for the “mythological realism” of her exquisitely rendered drawings from the classical Greek poet Ovid and his Metamorphosis. Micheline is enchanted by the poem’s traditional themes of identity and change, as well as its surprisingly modern relevance to human rights, feminism and environmentalism. Micheline empathizes with the conflicts faced by the classical figures, whose physical transformations represent the universal human struggle for identity, stability, and peace. Each drawing is based on a live model, whose pathos is shaped by the narrative of a corresponding poem. Series such as “Lotus/Dryope” (in which a young mother is transformed into a tree) are exemplary of her entire body of work and its anthropomorphic motifs. 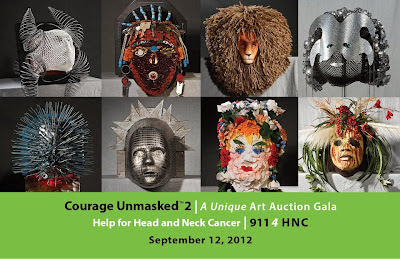 Please join 911 4 HNC for a unique gala event featuring a silent and live auction to raise money and awareness for head and neck cancer (HNC). Help support this worthy cause by attending this fun and whimsical art event. You'll love the art this year, some created by well known area artists and artists nationally. Come see! Tickets are on sale now! Purchase at the link below.

More than 50 artists from all over the country created fine art by transforming radiation masks formally worn by HNC patients to position and immobilize their heads during treatment. These unique masterpieces will be auctioned at the Gala. Money from mask sales and admissions will fund 9114 HNC, dedicated to helping those in financial need during and after treatment.