In the Cosmos Paintings, mixed media works play upon visual complexities and energies of the cosmos as seen through artist’s eyes

Abstract art is alive and well at IMAS.

“Abstractions: Anne Marchand” is a collection of paintings and mixed media works that were initially inspired by the artist’s attraction to images from telescopic photographs from space.

“Because we are an art and science museum,” posited Ann Fortescue, president and executive director of IMAS, “we have our eyes and ears out for exhibitions where these two come together. Some of the Hubble images are a wonderful starting point for looking at Anne’s work; clearly she is a star gazer.”

Marchand’s works were indeed inspired by Hubble images of the open, yet surprisingly cluttered cosmos, but the artist has taken them far beyond the amorphic dust clouds and luminous colors captured by the telescopic camera. That said, the impact of space remains. The scale of the paintings alludes to the reality of their inspirational source, with most of the works measuring about 72 inches by 72 inches and loom imposingly in the face of the viewer.

A sense of infinite space, sometimes filled violently with the unexpected, is contained on the surface of each canvas. Marchand once commented that the cosmos made her feel the microcosmic reality of our own existence and the scale of these paintings evokes that feeling.

Technically, the body of work moves from direct action painting aesthetics into multimedia experiences with the inclusion of beads, fabric, impressions of objects, and isolated areas of bold contrasting patterns. There is the sense that the deeper her imagination got into the cosmos, the more unexpected phenomena she saw.

To me, the strongest works on display incorporate bold patterns that lend an unexpected contrast against the dominance of her self-expressive paint explorations and seem to take us deeper into complex cosmic beauty. 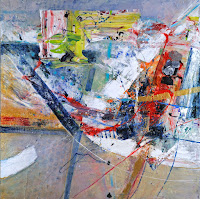 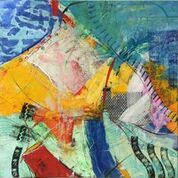 “Birth of Venus” is a stunning work that offers a fresh take on a classic idea that moves a step beyond purely formal thinking while “Energy Echo” holds firmly to the action painting process, but “The Invisible” moves beyond the fascination with the paint itself. In this work there are shapes suggesting forgotten places that are becoming invisible through the distance of time; exuberant brushstrokes have been tamed to become areas of soft color, linking our defined reality to the indefinite miasma of the distant cosmos. “Journey” seems to be a statement of self-revelation with several different elements and techniques. As many abstract paintings do, these works often encourage the imaginations of viewers to participate in their abstract configurations, evoking thoughts about shapes, colors, or sparking a narrative response, as the viewer is absorbed more deeply into the work.

“But abstraction. Is there a word more belabored in the history of art history?” pondered an art critic Simon Wu about this year’s Whitney Biennial in Art in America magazine. “Abstraction is back ...again.”

While it has occurred sporadically regionally, the national scene has been enamored of figurative painting in recent years. Marchand’s efforts underline this recent Abstract movement with her attention to science innovations. About the time she finished this series, the James Webb space telescope had replaced the Hubble and was transmitting more cosmic photographs.

Marchand reflects the symbiosis of art and science and leads us into the newer cosmic visions to come.

Nancy Moyer, Professor Emerita of Art, is an art critic for The Monitor. She may be reached at nmoyer@rgv.rr.com.

WHERE: International Museum of Art & Science,