The Robert and Sharon Buchanan Collection 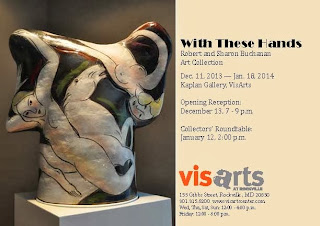 Robert and Sharon Buchanan share their exquisite art collection in the Kaplan Gallery this month at VisArts. Don't miss the Collector's Roundtable on January 12, 2014. 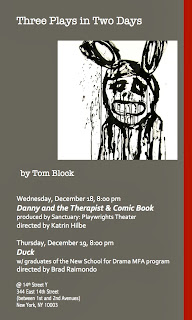 The Art League - Call to Artists

Definition of Abstract Expressionism–
an artistic movement of the mid-20th century comprising diverse styles and techniques and
emphasizing especially an artist's liberty to convey attitudes and emotions through nontraditional and usually nonrepresentational means. 1

Description -
The Abstract Expressionists valued spontaneity and improvisation. Works entered in this exhibit will demonstrate dynamic, energetic gesture and an emphasis on process. Although most works created during the post-war period of the 1950’s and 60’s, were abstract and free of references to real images, works for this exhibit can also be abstracted views of any scenes or figures. Some Abstract Expressionists included highly personal imagery combined in surprising ways such as in Robert Rauschenbergs “Combines”. Other Abstract Expressionists include Jackson Pollock, Clifford Still and Willem de Kooning. Art League instructors that artists can refer to for inspiration include Deanna Schwartzberg, Delna Dastur and Brenda Belfield.

Works not specifically created in the style of abstract expressionism will be considered for this exhibit but cannot be considered for awards. Most of us have been influenced by this seminal art movement and works entered should reflect how art today has carried on the ideals of Abstract Expressionism.

Note: To apply, artists must be members of The Art League.
Memberships are open to all, refer to website for more details.

*Artists can elect a one month trial membership for $30 and submit work for jury.

Notification – Artists accepted into this exhibit wil be notified via e-mail by Tuesday, January 7, 8:30pm. If not accepted, works must be picked up no later than Tuesday, January 21. After January 21 works left in the gallery will incur a $1.00 per day late fee.

Anne Marchand was born in New Orleans, Louisiana. She completed a Master of Fine Arts Degree Program at the University of Georgia. Marchand says about her own work, “ Moving with both conscious and spontaneous actions, I combine themes of spirit and matter.”

Anne is recipient of an Artist Fellowship 2014 from the DC Commission on the Arts and Humanities. Her work was a Showcase Winner with ARTslant New York in 2011. She was honored as Liquitex Artist of the Month in November 2004 and awarded a CAP/MEX EX Residency Grant in 2003 from the Mid Atlantic Arts Foundation. In 2002, Anne was nominated for Excellence in Artistic Discipline in the distinguished DC Mayor's Arts Awards. Her public art works can be seen in Washington, DC and in Crystal City, VA.

Anne's paintings are represented in numerous corporate and private collections in the USA. She has exhibited extensively in the United States. Current exhibits include Porter Contemporary in New York, Green Chalk Contemporary in California, the Boston International Fine Art Show, the Affordable Art Fair in New York City,  and “Great Streets, the Urban Life of DC” a group show at Zenith Gallery in DC. Marchand teaches private art classes and maintains an art studio in Washington, DC.

The Art League is located in the landmark Torpedo Factory Art Center, 105 North Union Street, on the beautiful Potomac River in historic Old Town Alexandria, Virginia. Facilities are accessible by car, bus, and Metro, allowing the League to serve the cultural communities of the metro Washington, DC area.

New York, NY. Porter Contemporary presents works focused on skill, technique and the ability to push the boundaries of a chosen medium through the works of Jason Bryant, Jeff Huntington, Lori Larusso and Carolina Rodriguez Baptista at this year’s Context Art Fair during Art Basel from December 3 – 8, 2013.

CONTEXT, will take place at a 45,000-square-foot pavilion in the renowned Wynwood Arts District. CONTEXT's successful 2012 debut established it as the ultimate platform for international galleries to present cutting-edge works by emerging and mid-career talents. The fair provides insight into the latest trends in contemporary art by contextualizing them with some of the finest examples of groundbreaking 20th century movements at its neighboring sister fair Art Miami.

Artworks from all represented Porter Contemporary artists will be available at the fair (see full list below); however the booth will focus on highlighting four artists whose work best represent Porter Contemporary’s mission to focus on skill & technique combined with pushing the boundaries of a particular medium.

Jeff Huntington’s work will focus on a new series he began in 2012 where he started “painting” by using magazine clippings as his medium.

Abstracted mundane interior and exterior scenes make up the basis of Lori Larusso’s shaped acrylic panels, each one balancing painterly and sculptural effects. Dissections of reality and unreality sometimes are combined in multiple panels interacting with a whole idea.

Carolina Rodriguez Baptista, led by the forces of her medium, bronze, follows the motion and hardiness by her own sense of self, femininity and strength. Baptista works through the harshness of the bronze to unearth feminine curves, tenacity and moments of self-satisfaction creating figures of action, gentleness and contemplation.

Are you in Miami this week? Be sure to pick up a copy of the December Issue of Art Voices Magazine which will feature a cover and interview with Washington, DC based artist Anne Marchand. Look for Art Voices Magazine street teams who will be handing out issues to fair goers inside and outside the fairs on December 3rd and 4th.

Artist website: www.annemarchand.com
Posted by Anne Marchand at 12/01/2013 No comments: