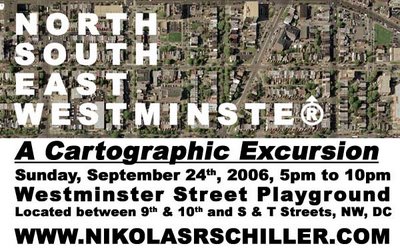 Nikolas Schiller is going to show his creative work (Awesome stuff!!) in the Westminster playground this Sunday. I'll be there on the early side to see this artist/cartographer exhibit some inspired pieces about our communities. I'm equally thrilled that Nikolas is showing in the Westminster Playground which is a gem of a pocket park nestled in our city on Westminster Street NW. I love that park because I spent so much time in the summer of 2002 creating the Westminster Mural there and getting to know the wonderful folks in the community. Now that Nikolas Schiller has thrown his artistic hat in the hood, Westminster is weighing in heavy on local talent. There's Mike Weber around the corner on 9th Street, Chuck Baxter on Westminster Street and some other Mid City Artists nearby. You'll find lots of surprises waiting for you. If your batteries run late night, well...I hear that the lights will be on until 10pm. See you early birds on Sunday.

"Earlier this year, Nikolas R. Schiller was awarded a D.C. Commission on the Arts & Humanities Young Emerging Artist Grant and was commissioned to produce 8 maps of 8 locations in the 8 wards of Washington, DC. The funding allowed for Schiller to print three copies of each of the maps and in August, as proposed in the grant, Schiller donated one set of the maps to the Library of Congress' Geography & Mapping Division, which is the world's largest collection of maps, atlases, globes, and aerial photographs. On Sunday, September 24th, 2006 Schiller will be displaying these commissioned maps, along with hundreds other selected maps, at his local neighborhood playground. The backdrop to this wonderful playground setting is the You are invited to come to see the world like you've never seen it before!"

Exhibit sponsored in part by the DC Commission on Arts & Humanities,
an agency supported in part by the National Endowment for the Arts'
Challenge America Program. Approved by playground's administrator,
the Westminster Neighborhood Association.

Interactive Flyer:
http://nikolasschiller.com/zoomify/flyer.html
(press the + to zoom in)