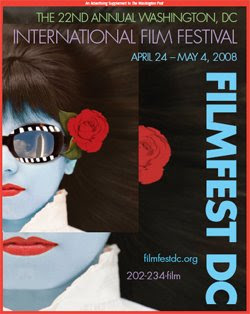 This year focuses on New Latin American cinema and Politics on Film. Special guests and events for every age will be featured. Encompassing a global range of cultures, music, and politics, Filmfest DC will represent cinema from over 30 countries. "This is an exciting year for the festival. We have a large selection of DC premieres, international festival headliners and award winners plus a handful of Official Foreign Language Film Oscar® Selections. In addition, we are offering a strand of films from Washington DC directors," said Festival Director Tony Gittens.

Thursday, April 24
Filmfest DC's Opening Night Gala will feature the premiere of the French film Two
Ladies at the Historic Lincoln Theatre at 7:00 pm. Guests will include the director, stars and producer of the film. A reception with live music and dancing will follow under a tent behind the Lincoln.

Friday, April 25
Patti Smith in person for the screening of her new film Patti Smith: Dream of Life, 9:30 pm at the Lincoln Theatre.

Tickets for most screenings are $10.00 each and can be purchased in advance at www.tickets.com or by calling 1-800-955-5566.Tickets may be purchased online at http://filmfestdc.org/tickets.cfm