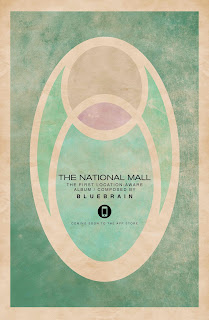 Washington DC-based music duo Bluebrain's latest release is not a standard album in the sense that it can be listened to passively in one sitting or, for that matter, at any location. It is a site-specific work of music that responds to the listeners location within the stretch of park in downtown Washington DC known as the National Mall. The album will be delivered as an app for the iPhone.

‘The National Mall’ works by tracking a users location via the iPhones built-in GPS capabilities. Hundreds of zones within the Mall are tagged and alter the sound based on where the listener is located in proximity to them. Zones overlap and interact in dynamic ways that, while far from random, will yield a unique experience with each listen. The proprietary design that is the engine behind the app will stay hidden from view as the melodies, rhythms, instrumentation and pace of the music vary based on the listeners’ chosen path. ‘The National Mall’ is an ambitious project that will allow users to listen to and interact with a work of music in a way that’s never been possible before.

‘The National Mall’ is the first in a series of location-aware musical works that Bluebrain will compose and design for sites around the world in the coming months and years. The second work of this nature, designed for Prospect Park in Brooklyn, New York will debut later this summer followed by a piece that will stretch the entire length of California’s Highway 1.

‘The National Mall’ will be available in the Apple App Store in the coming weeks.

Bluebrain is the Washington DC-based music duo of brothers Hays and Ryan Holladay. In addition to performing live and releasing traditional albums, they have gained a reputation for executing unique projects throughout the city. They’ve been commissioned to create works for The Smithsonian, The Corcoran, and The Phillips Collection in the two years since they began.
Posted by Anne Marchand at 3/29/2011