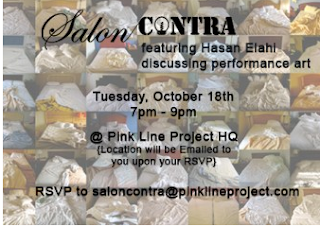 After an erroneous tip called into law enforcement authorities in 2002, Elahi was subjected to an intensive post 9-11 investigation by the FBI.  After this harrowing experience, Elahi conceived “Tracking Transience,” a self-tracking system that constantly and publicly presents his exact location, activities, and other personal data. Join Hasan Elahi for a discussion. For more information and to rsvp, click here

Hasan Elahi is an interdisciplinary artist whose work examines issues of surveillance, simulated time, transport systems, borders and frontiers. His work has been presented in numerous exhibitions at venues such as SITE Santa Fe, Centre Georges Pompidou, Sundance Film Festival, Kassel Kulturbahnhof, and at the Venice Biennale. Elahi recently was invited to speak about his work at the Tate Modern, The Einstein Forum, and at at the American Association of Artificial Intelligence. His work has been supported with grants and sponsorships from the Creative Capital Foundation, Ford Foundation/Philip Morris, and the Asociación Artetik Berrikuntzara in Donostia-San Sebastián in the Basque Country/Spain. His work is frequently in the media and has been covered by The New York Times, Forbes, Wired, CNN, ABC, CBS, NPR, Al Jazeera, Fox, and has also appeared on The Colbert Report. In 2009, he was Resident Faculty and Nancy G. MacGrath Endowed Chair at Skowhegan School of Painting and Sculpture and was a 2010 Alpert/MacDowell fellow. Currently, he is Associate Professor of Art at University of Maryland and Director of the Digital Cultures and Creativity Program in the Honors College..
Posted by Anne Marchand at 10/11/2011