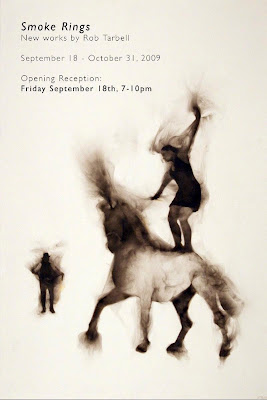 Gallery Imperato presents Smoke Rings, a solo exhibition of new work by Rob Tarbell from his series, Smokes. Comprised of smoke-marked works on paper that depict performing animals, the work intends to balance accident with control and give permanence to the ephemeral. The parallel between the artist's subjects and unconventional process makes for a thought-provoking exhibition. A portion of the proceeds will be donated to animal rescue organizations.

The idea for Smokes stemmed from a self-help technique in which sentimental objects are burned to remove their emotional burden. Tarbell took the technique a step further by mounting paper to the ceiling in a Michelangelo-like fashion in order to capture the resulting smoke. Credit cards, photos and slides of his artwork are frequently sacrificed. In the process of being destroyed, the burning objects emit smoke upwards onto the paper thus capturing and containing the memory of what was. The finished pieces depict almost ghost-like images of galloping horses, dancing bears and trickster elephants.

Modifying the behavior of the animals for use in entertainment requires knowledge of their specific natures and how they would respond to different stimuli. The same is true for the use of smoke as an instrument for creating art. The properties must be known and used appropriately or the desired result will not ensue. Attempting to control and direct smoke onto paper is much like taming a wild animal. It is unpredictable and unnatural, yet the result is often breathtaking. The images are kinetic, powerful, haunting and beautiful. They seem to have a life of their own, a spirit, a memory.