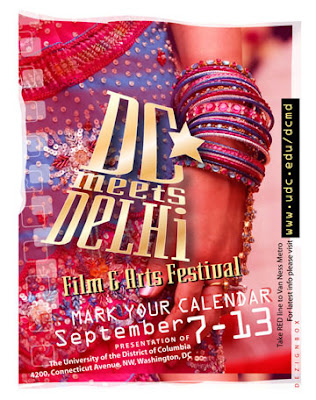 Screenings in either UDC auditorium (seats 600) with full-feature screen and quality projection, in the adjacent Little Theater (seats 100) or Building 41/A03 (seats 120).

APARNA SEN, one of India’s foremost women directors, brings to her films an unusual sensibility. It is a sensibility that has been shaped and informed by a rare mix of empathy,intellect, socio-political awareness, and a finely honed cinematic craftsmanship. Although she is an actress of considerable talent, working with some of the finest directors, itis her work as a filmmaker that has brought her widespread recognition.

♥Monday September 10, 2007 2:30-6:00pm
Interactive Panel Discussion on Urban Water Issues: What can DC learn from Delhi? Following the screening of Running Dry (USA/2005/55 mins.) a film which focuses on the problems being caused as a result of dwindling global water supplies.
UDC, Building 41/A-03
RSVP to colin2e@dcdebate.org

Representations of Mahatma Gandhi have become widespread in the past few years and suggest a resurgence of interest in his life, values, influence and influences. Focused through the prism of film, this panel presents screen representations of Mahatma Gandhi and a close examination of his global role in 2007. The panel follows the Tuesday, September 11 screening of The Making of the Mahatma (1996) by Shyam Benegal Panel speakers include Carrie Trybulic, Director of the Gandhi Memorial Center, Washington DC, Dr. Bobby Austin, University of the District of Columbia and Dr. Anastup Basu, University of Illinois at Urbana-Champaign and invited participants Mrs. Banu Mushtaq, award-winning author of the book Hasina, and Tara, Indian National Award Winner for her screen portrayal of Tara in the film Hasina (2004), which is being screened immediately after the Gandhi 2007 panel event. Panel FREE and open to all.

FREE PARKING at the UDC Van Ness parking lot, off 4200 Connecticut - follow the signs to the auditorium and amphitheater area. RAIN or SHINE: events are both inside the auditorium area and outdoors under the trees around the amphitheater.
Posted by Anne Marchand at 9/01/2007

Email ThisBlogThis!Share to TwitterShare to FacebookShare to Pinterest
Labels: DC Meets Delhi Festival, University of the District of Columbia