Join me at The 2008 Rawls Museum Arts Juried Exhibition. I'll be heading down to the opening on Friday. Since we'll be so close to Richmond, it'll be a good weekend to catch a show at the Virginia Museum of Fine Arts. 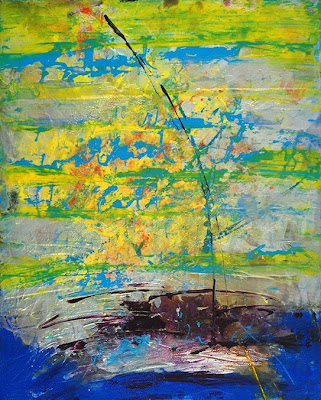 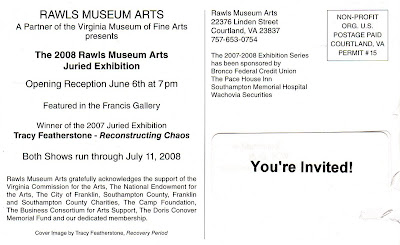 The Rawls 2008 National Juried Exhibition represents artists selected by Juror Nancy Sausser, Exhibitions Director at McLean Project for the Arts. A sculptor and arts writer as well as a curator, Sausser's writing has been featured in publications such as the Washington Post and FiberArts Magazine.

The Francis Gallery will feature the 2007 Winner Tracy Featherstone with her installation titled Reconstructing Chaos. Tracy is the winner of the 2007 National Juried Exhibition juried by Lia Gangitano, founder of Participant Inc. NYC.
Tracy is the Assistant Professor and Foundations Coordinator at Miami University.

Both exhibitions will be open through July 11, 2008.
The Rawls Museum Arts Opening Receptions are free and open to the public. Courtland, VA
Gallery hours are: Wednesday through Friday, 10 – 5 pm
Tuesdays, Saturday and Sunday, 1-5 pm
Posted by Anne Marchand at 6/02/2008