An Allegory in Ink 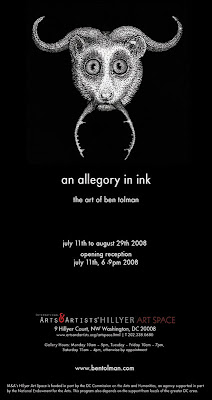 I met this amazing artist during the 52 O Street Open Studios in April this year. Ben was working on a large 80"x 64" drawing that was started more than a year ago. Ben's images are rendered in ink, exquisitely detailed and symbolic. You can see his work at Hillyer Art Space thru August 29. Take a sneak peak at the installation Here.

An Allegory in Ink highlights Ben Tolman’s signature style of intensely detailed and micromanaged, large-scale ink drawings. Expanding from his obsession with monsters, fantastical creatures and unusual and bizarre scenes, Tolman presents a series of drawings exploring the human condition.

MY NAME IS JASON, by Reynolds and Griffin

Jason Reynolds and Jason Griffin are a collaborative artistic duo making their exhibition debut in Washington, DC at IA&A’s Hillyer Art Space. My Name is Jason will feature a selection of their most recent works which seamlessly mesh Reynold’s poetic prose with Griffin’s expressive paintings. In My Name is Jason, Reynolds and Griffin raise topics from introspection to pop culture to the senselessness of violence. Reynolds’ loaded and multifaceted words are ingrained in Griffin’s precise and bold brushstrokes, giving the artwork a consistent quality of intelligence and deep meaningfulness.

EVERY DAY, by Mandy Burrow

Every Day by Mandy Burrow features five sculptural installations that explore life, death and resurrection. Through this artistic investigation, Burrow confronts the issue of time and its effects on memory. The work embodies the contrasts of what is there and what is not, what is remembered and what is forgotten. Burrow’s pieces transcend this divide between the past and present, the lost and found, and exist somewhere in the between.