An exhibit entitled “Journey” was on view at the Greater Reston Art Center (GRACE) until November 12th. I had made the pilgrimage out there to see the show (and it did seem a pilgrimage from my home in Colesville, MD), and meant to write a review while the show was still up. Swamped with other work, I didn’t make it. Yet, I feel that some thoughts about this remarkable artist are in order, even now that the show has closed. 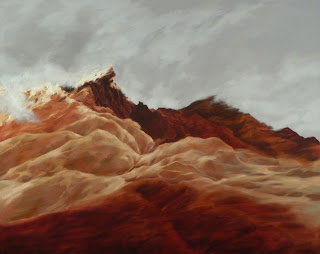 The first word that comes to mind looking at these paintings as a group might be “sublime”. When thinking about that rather slippery concept as applied to art, one might be imagining something by Turner or Caspar David Friedrich, artists who did try to embody eighteenth-century writer Edmund Burke’s aesthetic notion in actual works of art. The sublime is a feeling that involves an element of fear, something beyond the merely beautiful or picturesque precisely because of that fact. It is something that we experience in nature, as at the edge of the ocean at night when we look out at the horizon, and feel simultaneously exhilarated and overwhelmed at the greatness of what is in front of us—part of that huge sky and water—knowing full well that it would be death to move into it. The experience can occur in art as well, and this was, of course, at the core of Romanticism.

I think the most moving thing about Freya’s paintings is the way that they so completely convey this sense, and the feeling that one is experiencing what the artist experienced confronting the natural scenes represented in these large scale paintings. These are not realistic works, and, although descriptive, do not reproduce the visual record so much as the experiential one. It’s that sense that we are there with her, viewing the volcano Cotopaxi, as thrilled as Frederic Church (Freya’s art great grandfather) had been more than a century ago. Or seeing/feeling the tides pulling out at the water’s edge in Beach. Because these paintings are so full of experience, they provoke memories in the viewer of his/her own moments of the sublime. They rushed in on me as I looked, and kept me looking, and thinking for a long time.