The Language of Towns & Cities: A Visual Dictionary by Dhiru Thadani

Dhiru A. Thadani, AIA Architect + Urbanist in Washington DC has a new book out. The Language of Towns & Cities: A Visual Dictionary was just published by Rizzoli and is now available online

and in bookstores. Written by Dhiru A. Thadani, Foreword by Leon Krier, Introduction by Andres Duany

The final word on the language of urban planning and design. 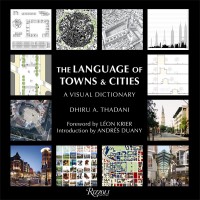 The DC Creates Public Art  mural "Community"at the Westminster Playground is featured in the book with artist credit Anne Marchand. You may consider purchasing this handsomely illustrated book and using the book as a reference.

Excerpt from Review "The Language of Towns & Cities: A Visual Dictionary" by Rob Krier

One experiences the same joy of surprise the first time one leafs through Dhiru Thadani s book. At first one thinks, Oh, an encyclopedia! before one realizes that this would require an edition of several volumes....His subject is not a manual for the care and repair of a machine, but instead deals with the technique of housing man in cities: an eminently caring mission. Apart from historical information about cities, such as Rome, Paris, Pienza, Chandigarh, New Delhi or Hong Kong, there are typological and morphological chronicles of town squares and streets, right up to details of street crossings, traffic circles and paving patterns, terraced houses, passages and arcades everything that s beautiful, arranged in alphabetical order.... It's more than just a handbook, it is a guide.  Rob Krier Berlin, April 2010 (Translation from German: Cathal Whelehan)

Book Description: The final word on the language of urban planning and design. The Language of Towns and Cities is a landmark publication that clarifies the language by which we talk about urban planning and design. Everyday words such as "avenue," "boulevard," "park," and "district," as well as less commonly used words and terms such as "sustainability," "carbon-neutral," or "Bilbao Effect" are used with a great variety of meanings, causing confusion among citizens, city officials, and other decision-makers when trying to design viable neighborhoods, towns, and cities. This magnificent volume is the fruit of more than a decade of research and writing in an effort to ameliorate this situation. Abundantly illustrated with over 2,500 photographs, drawings, and charts, The Language of Towns and Cities is both a richly detailed glossary of more than seven hundred words and terms commonly used in architecture and urban planning, and a compendium of great visual interest. From "A" and "B" streets to Zero Lot and Zeitgeist, the book is at once comprehensive and accessible. An essential work for architects, urban planners, students of design, and all those interested in the future of towns and cities, this is destined to become a classic in its field.

Links to reviews on the book:
http://www.examiner.com/landscaping-urban-design-in-boston/the-language-of-towns-and-cities-review

Amazon - The Language of Towns and Cities

Rizzoli Publications: The Language of Towns & Cities
< by Dhiru Thadani
Posted by Anne Marchand at 12/21/2010