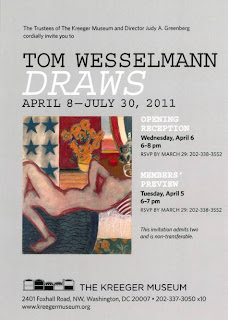 In the 1960s, Tom Wesselmann was one of the key figures in the Pop Art Movement along with Andy Warhol, Roy Lichenstein, James Rosenquist and Robert Indiana. He was a brilliant colorist, superior draftsman and innovator of new techniques, who devoted his life to his art and his family. Tom Wesselmann Draws is the most comprehensive exhibition of drawings by the artist that has ever been assembled. Many of the 60 pieces on view have never been seen outside the artist’s studio in New York.

The exhibition, which covers drawings from his entire career spanning 1959-2004, was originally curated in 2003 by Wesselmann and his wife Claire and encouraged by Emilio Steinberger, Director of the Haunch of Venison Gallery in New York City. Wesselmann passed away in 2004 at the age of 73 and the show was put on hold. Five years later, Claire felt ready to revisit the project. “Working in collaboration with the Museum on the installation of the exhibition, his wife Claire will apply her own aesthetic sensibilities to capture the essence of her husband’s oeuvre,” says Greenberg. As stated by Aimee Walleston in the December 2009 issue of Art in America, “Claire Wesselmann is as alive as in Wesselmann’s drawings, with a keen intellect and a uniquely personal take on her husband’s practice.”

“Some supporters have urged me to put together a drawing show because I have never had a major drawing show. The project interests me from another point of view in that I have made drawings in ways more adventurous than what many envision...The scope of the show will be to present a well edited selection of the best drawings available covering the full range of my varied production. I don't view the show as delineated by decades in any way, but as a continuity of drawings as they occurred...A show that will enlarge the common perception of what a drawing is to a surprising and rewarding degree.”  –Tom Wesselmann, New York City, 2003

The Kreeger Museum is a private, non-profit museum located in the former residence of Carmen and David Kreeger. Designed by renowned architect Philip Johnson, it showcases the Kreegers’ permanent collection of 19th and 20th century painting and sculpture, as well as African art. The Kreeger Museum is located at 2401 Foxhall Road, NW in Washington, DC. The Museum is open Tuesday – Friday by reservation only for the 10:30 am or 1:30 pm guided tour. Saturday open hours are from 10 am – 4 pm. For further information, call 202-337-3050 x10.
Posted by Anne Marchand at 4/02/2011