May your days be Merry and Bright

This the season for joyous song! I went to hear my favorite men's choir at Church of the Epiphany this afternoon, the Washington Men's Camerata. 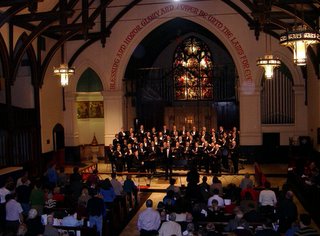 The choral ensemble includes our very own Chuck Baxter. Chuck sings Second Tenor in the Camerata and is also a Washington, DC visual artist who works with found objects. The performance this afternoon was lovely, graceful and sung with heavenly men's voices! 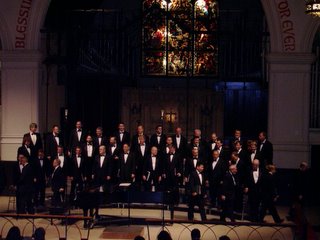 The program "Christmas with the Camerata" delivered delightful Traditional Carols as well as unusual selections such as a 16th Century Slovenian Carol. Winter Wonderland and Have Yourself a Merry Little Christmas capped the performance and left me and the full house feeling in the holiday spirit. Frank Albinder, Music Director for the Washingon Men's Camerata has performed in all fifty states and in twenty foreign countries. He is also Music Director of the Woodley Ensemble and Conductor of the Virginia Glee Club, University Of Virginia in Charlottesville. 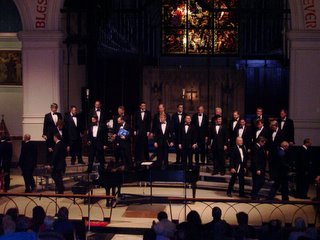 I am looking forward to their next performance on March 26, 2006.... The Camerata Sings Songs of Love including a beautiful sonnett by Elizabeth Barret Browning.

Here's a review of the one of the concert's that came out in the Post today. The reviewer was at the concert Saturday in Bethesda.

"The Washington Men's Camerata sang Christmas songs on Saturday night at the Bradley Hills Presbyterian Church in Bethesda, in a program ranging from a carol in the Huron language to Renaissance chorales to "White Christmas." What unified the diverse program was not only the seasonal theme but also the sound of the camerata under its music director, Frank Albinder: evenly balanced throughout the men's tonal spectrum, luxuriantly blended, gloriously full and rich, yet crisp and nimble when the music demanded it.

It was, in short, a sound sure to put anyone who heard it in a festive mood. For the most part, the program mixed extremely adventurous choices with ear-catching arrangements of familiar tunes. The haunting, contemplative melody of the Huron carol, " 'Twas in the Moon of Winter Time," provided a fine setting for its images of hunters at the manger, and a robust 16th-century Slovenian carol received a jubilant performance. The ambiguous, reflective harmonies of Healy Willan's touching "The Three Kings" were handled with memorable delicacy by the camerata and three fine soloists, Patrick McMahan, Chris Johnson and David Evans. Two of the arrangements came across especially well: Patrick Dupre Quigley's jolly "Wassail" and Mark Riese's take on "Christmas Comes Anew," which pumped up the carol with complex antiphonal effects and extensive demands on the accompanist. Plenty of genial banter from music director Albinder and two unusually sonorous audience singalongs gave this fine holiday concert some extra sparkle."
-- Andrew Lindemann Malone