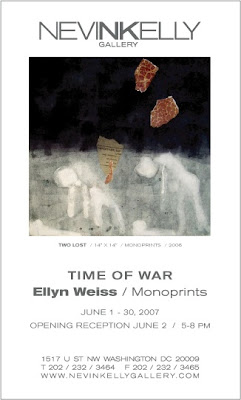 Noted local printmaker and painter, Ellyn Weiss, will unveil a series of prints called "Time of War" at the Nevin Kelly Gallery, 1517 U Street, NW, in Washington, DC. The show will run from June 1 through June 30.

"Time of War" is a series of 14" x 14" monoprints made last summer at the Fine Arts Work Center in Provincetown, Massachusetts on a press that was once used by Robert Motherwell. The artist describes them as"meditations on the pain of war, as simple and universal as I can make them - my effort to convey feeling directly with a minimum of complexity."

A frequent exhibitor in the Washington area (with a solo exhibition of paintings currently on display at the Touchstone Gallery), Weiss spends her summers printmaking on Cape Cod. During the rest of the year, Weiss lives in Bethesda and paints in her studio in Washington, DC.

As is typical of her print work, the pieces in the Time of War series are marked by dramatic imagery and a mixture of bold colors and stark black and white. Putting aside one's views on the justness of war, these works are sharp reminders that war is a hellish experience for those who are caught in the middle of it.