Alphabet: An Exhibition of Hand-Drawn Lettering and Experimental Typography 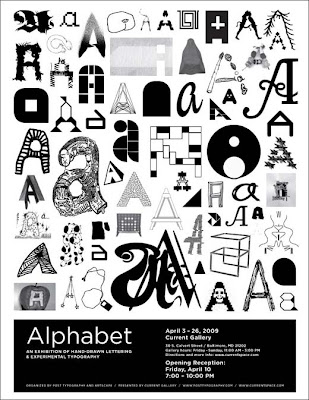 Alphabet: An Exhibition of Hand-Drawn Lettering and Experimental Typography
Through April 26, 2009

Current Gallery presents Alphabet: An Exhibition of Hand-Drawn Lettering and Experimental Typography, organized by Post Typography and Artscape. Following the successful opening exhibition in July 2005 at the Maryland Institute College of Art in Baltimore, Alphabet has been traveling nationally, and is now coming home to Baltimore.

Focusing on an ordinary subject that we see each day, often in the hundreds of thousands, Alphabet presents 26 letters as more than just shapes for conveying information. The 51 artists and designers in this show conceive and interpret the alphabet in surprising and inventive ways, ranging from graceful and polished to witty and subversive. The 63 alphabets featured in Alphabet were created by artists in North America, Europe, and Asia, representing work from well-known typographers such as Ed Fella and Ken Barber to young, rising artists such as Sweden’s Hjärta Smärta and Andrew Jeffrey Wright of Philadelphia’s Space 1026.

Current is located at 30 S. Calvert, Baltimore, MD. Gallery hours are Friday through Sunday, 11am-3pm, and by appointment.

www.currentspace.com
Posted by Anne Marchand at 4/17/2009