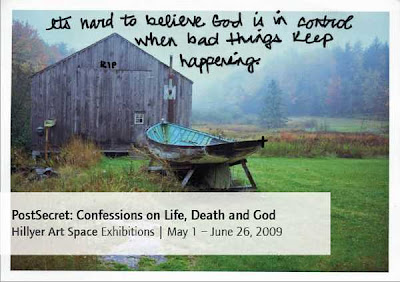 Food and refreshments will be served
$5 suggested donation

Opening announcements will be made at 6:45PM

PostSecret creator Frank Warren will be signing books from 7-8:30PM. Books will be available for purchase.

Become part of PostSecret! Postcards and materials will be available for all to confess their own secrets (Postcards will be displayed at Hillyer throughout the show and then given to Frank Warren to add to his collection)

In November 2004, Maryland resident Frank Warren launched a community art project that would soon become a worldwide phenomenon known as PostSecret. By handing out postcards and leaving them in public places around Washington, D.C, Warren invited strangers to anonymously send him their secrets. Within one month, Warren received more than 150 postcards and today he has collected over 350,000 postcards...and counting! The exhibit, PostSecret: Confessions on Life, Death and God, takes its title from Warren's upcoming book expected to be released in the fall of this year. The displayed postcards unearth a myriad of private thoughts concerning spirituality, religion and faith. Addictively compelling, the cards reveal our deepest fears, desires, regrets and obsessions. Warren calls them "graphic haiku," beautiful, elegant and small in structure but emotionally powerful.