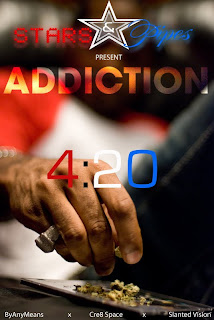 Mar 11, 2010 – Highly controversial “Stars & Pipes: An Exploration of Drugs in America”, opens on 4.20 at {Cre8} Space Studio Gallery. The exhibition is a platform for community participation in several debates and panel discussions reviving the topic of drug control, recently minimized by health care and the economic crisis.

DC was ground zero for the 80‟s crack explosion. Nearly half of the populous was devastated by addiction or violence. The effects remain ever present, making DC a drug discussion hot bed. Stars and Pipes is the match. And drug king pin of the 80‟s, Cornell Jones, creator of “Butt Naked” the killer drug, which escalated the problem to crisis, is on the guest list. The opening night extravaganza is set for 8pm on April 20, commonly referred to as 4:20.

During the month a series of programs- a panel discussion (Apr 22), debate (Apr 29), testimonial (May 5) with narcotics enforcement professionals and ex-drug offenders will take place. Perhaps the most impactful is, “Testify”, a program of addicts telling their story. All programs will begin at 7pm and end at 9pm.

The goal of the show is to provide a multiple perspectives on various aspects of drugs and provide a platform for community discussion. This is sure to create a tidal wave of happenings, heavy debate and intense activity regarding drug control in DC. The exhibition runs until May 19.

Visit www.cre8space.tumblr.com for more information.
Posted by Anne Marchand at 4/04/2010