Article: No Business? No Problem: Art Pops Up in Vacant Retail Spaces Posted by Erin Petty on Aug. 4, 2010 at 3:18 pm Washington City Paper

Read Erin Petty's article above describing the art, art incubator and retail incentives behind this project. 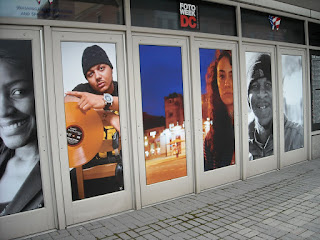 Portraits of DC on N street


Be sure to come out to see the new Windows into DC, Phase II, on M Street @ Walter E. Washington Convention Center. It's a pop-up arts project in vacant retail windows at the convention center. My work from the Playground Series was part of the initial launch of the program last year. Artists work will be on display over a period of months to attract tourists, visitors and community members to the area. You can dial in to hear the artists talk about the work that they are exhibiting so bring your cell phones!

Hosted by the DC Commission on Arts and Humanities (DCCAH) and the Washington E. Convention Center. The festival is free of charge and features art by local artists, music, fashion and local businesses. This initiative provides free spaces for artists and organizations to showcase and sell their goods, while also offering District citizens free and public art. A press conference to announce the new art happenings in and around the Washington E. Convention Center took place today and you can see a preview of some of the art in the windows at my Artravelin Flickr set.