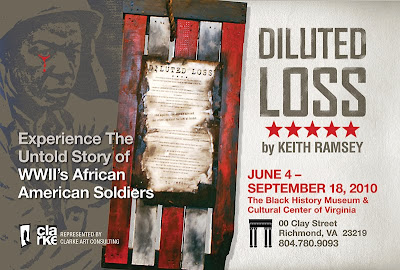 Hear Keith Ramsey speak about the passion and inspiration behind this art series. Learn how Mr. Ramsey created more than just a work of art, but an educational tool to about American history.

Diluted Loss illustrates the racism and discrimination that was directed toward African American troops in World War II, both from the United States military as well as Japanese and European troops. The series is mixed media, and was created using organic materials, acrylic and oil paint, snips of news articles and letters from soldiers, and other charred symbols of American liberty.

Ramsey describes the series as “not a pretty picture I painted, but an important one”. Ramsey considers himself to be a documentarian, charged to present the overlooked, historical accounts of African American soldiers through art.

Keith M. Ramsey grew up in Williamsburg, Virginia. The son of an artist, he developed an early affinity for the works of Edward Hopper. Since receiving his Degree in Fine Arts from Virginia Commonwealth University in 1998, he has been working steadily toward his artistic vision of images created from influences of experience, introspective thought and political perspective. His work has been exhibited throughout the Richmond area.

For more information about the exhibition visit The Black History Museum of Virginia.