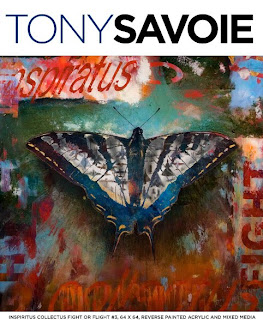 
Tony Savoie's distaste for war is front and center in much of his work. His pieces often position animals, perfectly obedient, in front of soldiers or other expressions of warfare, drawing comparison in their training to follow commands. Savoie criticizes the pack mentality and questions the morality of acting solely on orders rather than self -evaluation. "In addressing the gap between the potential for human decency and an often brutally cruel reality, I'm attempting to balance anger and apathy with humor and horror. I want to combine immediate and exciting painting with broader concepts, and the desire of initiating a dialog on the topic of human critical thinking."
Tony Savoie's process is intricate in its execution, laying reverse painted pieces of clear acrylic onto backgrounds composed of found photographs and artifacts. He uses a wide range of media, from spray paints to pencils, photographs, stencils and oils to create his multi-dimensional statements.