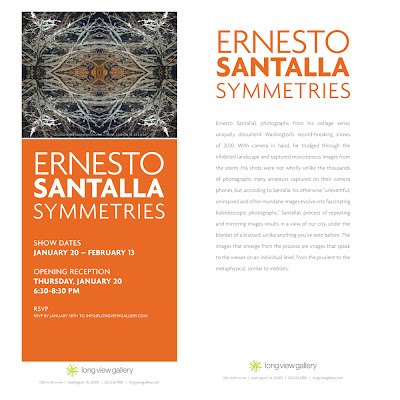 EErnesto Santalla's photographs from his collage series uniquely document Washington's record-breaking snows of 2010. With camera in hand, he trudged through the inhibited landscape and captured monotonous images from the storm. His shots were not wholly unlike the thousands of photographs many amateurs captured on their camera phones, but, according to Santalla, his otherwise "uneventful, uninspired and often mundane images evolve into fascinating kaleidoscopic photographs." Santalla's process of repeating and mirroring images results in a view of our city, under the blanket of a blizzard, unlike anything you've seen before. The images that emerge from the process are images that speak to the viewer on an individual level, from the prurient to the metaphysical, similar to inkblots