The Shape of Things to Come: A Creative Collaboration 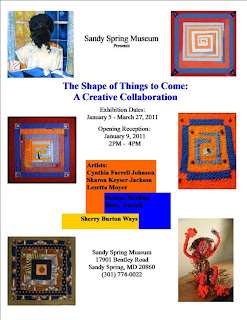 
It all started when Cynthia Farrell Johnson, a painter, met Sharon Keyser Jackson, a fiber artist. Each admired the work of the other. They mused about the possibility of doing a joint project some day. A little over a year after that initial conversation, they hit upon an idea. Johnson would create four designs and Sharon would interpret them as tapestries. Johnson invited longtime friend and an extraordinary quilter, Lezetta Moyer, Johnson to join the group. The next artist drawn into the project was Johnson's sister, Betty Farrell, an accomplished knitter who has collaborated with her sister in the past. When Desiree Sterbini, who does exquisite oil pastels, heard about the project, she wanted to join. Wanting to find a way to bring a three-dimensional artist into the mix, and remembering a doll exhibition they had seen at Sandy Spring Museum, the group invited, noted one of a kind doll artist extraordinaire,  Sherry Burton Ways to join. Altogether their work celebrates the many ways that artists express themselves. The titles from each of Johnson's original paintings form the common thread.