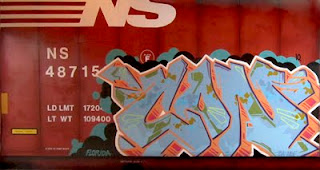 About Derailed 2 Conlon says, “I discovered freight train graffiti as a college kid in Baltimore just as the scene was emerging. As one of the biggest port cities on the East Coast, commercial cargo regularly arrived on large ships in Baltimore Harbor and was transferred to freight trains headed toward big cities like Atlanta, Chicago, and Los Angeles. Train cars were everywhere and as an art student with in interest in graffiti, it was easy to get hooked on this revolving art gallery.”

The event is FREE and open to the public.

About the Artist
Conlon is best known for his large-scale murals and canvases. He was one of two aerosol artists featured in the Smithsonian National Portrait Gallery’s 2008 exhibition, RECOGNIZE! Hip Hop and Contemporary Portraiture and recently was featured and had a small curatorial role in the Los Angeles Museum of Contemporary Art’s Art in the Streets exhibit. Works by Conlon have also been exhibited at the Corcoran Gallery of Art in Washington, D.C., Art Basel in Miami, Strychnin Gallery in Berlin, and numerous other galleries. He has been featured in dozens of publications, websites, and other media outlets including Smithsonian Magazine, Washingtonian Magazine, The Washington Post, Washington City Paper, NPR, DC Modern Luxury, American Observer, Paste Magazine, the DCist blog, and The Examiner. Conlon posts regular missives about art and culture both local and global on his website and blog, www.conoperative.com.
Posted by Anne Marchand at 9/10/2011