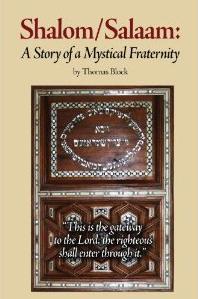 Tom Block will discuss his book, "Shalom/Salaam: A Story of a Mystical Fraternity," which introduces the story of respectful interfaith relations between Sufis and Jewish spiritual thinkers for nearly one thousand years.  From the inception of Islam, to the Golden Age (8th-12th centuries) Jewish-Sufis of Arabia, North Africa and Spain, through the Kabbalists in Spain and the Holy Land, and then into 18th-century European Hasidism, Islamic ideas strongly influenced the Jewish mystical system. Even today, Sufi and Islamic influences, many which can be traced back into the Qu'ran, inform Jewish worship and meditation practices.

Tom has talked about this groundbreaking study at the Chief Rabbi's Office in Istanbul; al-Azhar University in Cairo; Columbia University (NY); Middlebury College (VT) and at Mosques, Synagogues and interfaith groups throughout the United States.
Posted by Anne Marchand at 3/16/2012