The International Year of Astronomy 2009 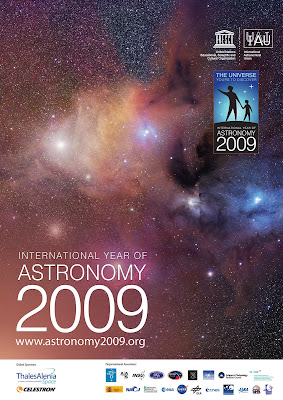 a global effort initiated by the International Astronomical Union and UNESCO to help the citizens of the world rediscover their place in the Universe through the day- and night-time sky, and thereby engage a personal sense of wonder and discovery.

Everyone should realise the impact of astronomy and other fundamental sciences on our daily lives, and understand how scientific knowledge can contribute to a more equitable and peaceful society. IYA2009 activities will take place locally, nationally, regionally and internationally. National Nodes have been formed in each country to prepare activities for 2009. These nodes will establish collaborations between professional and amateur astronomers, science centres and science communicators to prepare activities for 2009. Already now, 136 countries are involved and well over 140 are expected to participate eventually.

In recognition of the 400th anniversary of Galileo Galilei’s first celestial observations, 2009 has been designated the International Year of Astronomy. To celebrate, NASA’s Great Observatories – the Hubble Space Telescope, Spitzer Space Telescope, and Chandra X-Ray Observatory – are collaborating to produce spectacular multi-wavelength views of our universe. Click to see participating Institutions.


400 Years of the Telescope
A journey of science, technology and thought.
Documentary on PBS. Check Viewing Schedule

Panoramic visuals, cutting-edge technologies and introspective contemplations position 400 Years of the Telescope as the must-see cinematic feature for the International Year of Astronomy in 2009.