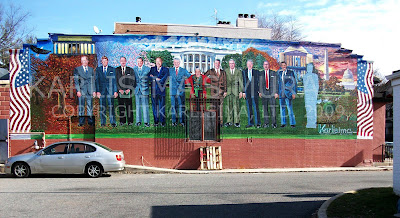 Karlisima has created the first major mural in Washington DC to include President Obama, standing with the 10 most recent presidents of the United States. The mural, beginning with President Dwight Eisenhower in chronological order all the way to Obama, is now on display at 1967 Calvert Street NW, Washington, DC at the Mama Ayesha’s Restaurant.

Washington, DC artist Karlisima has created a 60’ x 25’ mural for the community which will educate and delight generations to come. Working nonstop for months, the artist unveiled the presidential mural in January. This historical mural is funded by the D.C. Commission on the Arts and Humanities, the Mama Ayesha’s Restaurant, the ANC (The Adams Morgan Advisory Neighborhood Commission) and Private Sponsors.

The mural is being unveiled at President Obama’s Historical Moment: The first African-American President ever elected in the History of the USA. The mural also includes major D.C. landmarks such as the White House, the Lincoln Memorial, Jefferson Memorial, the Capitol and Washington Monument, giving the mural a look of DC's largest postcard on a wall.

The 60’ x 25’ Mural was unveiled on Monday January 19th 2009, prior to Obama’s inauguration. The Mural is now available for Public viewing anytime at the Mama Ayesha’s Restaurant, location outside restaurant wall, at 1967 Calvert Street NW, Washington DC, 20009 by the Duke Ellington Bridge.(www.mamaayesha’s.com)

Creating a mural of this magnitude takes the support of many segments of a community and the dedication and vision of the artist to contribute to and enliven a space for its citizens. The subject matter and theme of this mural are relevant to the times. There's also a surprise element in the mural for the future. You won't want to miss seeing this beautiful new creation to DC's Public Art feasts.

Karlisima would like to thank the Art Initiative of the DC Commission on the Arts and Humanities:

“The P.A.B.C. initiative (Public Art Building Communities), has allowed me to make a bridge between the community, the Restaurant Mama Ayesha’s, the arts and all the people who have made this mural a reality. This could not be done without the support of all the community and the help of the DC Commission and the Restaurant and all the entities who funded the project. I hope that this mural will become a teaching tool of the History of the Presidents for schools, children and the public in general. This is a gift to the City of Washington DC to celebrate this historical moment in American History and will remain open to the public to see for generations to come. This is fulfilling the idea that mural art is available for the public and for the masses.”