Six in the Mix: Selections by Renee Stout 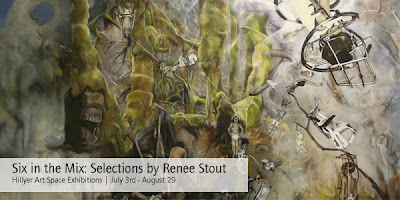 Stout has set out to create a mixed bag of local talent not based in the obligatory conceptual framework predominantly exhibited in group shows. Instead of the varying inspiration and ideas behind the individual bodies of work, it is the “natural dialogue that may occur between these works” which Stout would like the audience to experience. “I also didn’t want the viewer to come into the exhibition with preconceived ideas about the works based on any theme that I had imposed. Instead, I simply chose to select work that resonated with me on an intuitive level, but there is no doubt that my penchant for political conspiracy theories, personal and cultural sensitivity to notions of beauty and my childhood love for horror films and Mad Magazine creeped in during the process,” says Stout.