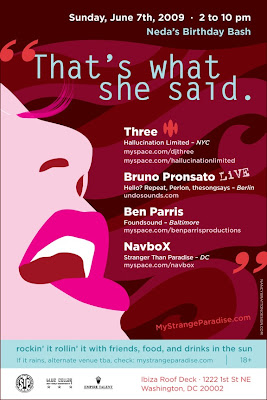 Ibiza Rooftop Deck
1222 1st St NE
Washington DC
Very amazing sounds, from a few masters…Three (DJ set), Bruno Pronsato (Live) , Ben Parris (DJ set), NavboX (DJ set)
Three (DJ set)
: Currently residing in New York City, Three has been tirelessly holding the flag for underground electronic music in the US since his rise out of the sunny state of Florida in the early 90's. In that time, he's emerged as one of the brightest DJ talents in the US and continues to be a true inspiration for many. Three’s tour dates show both diversity in audience and a genre-bending passion for good music; he’s held residencies at NYC’s Twilo, Cielo (Robots) and Love, as well as Florida’s legendary Simon’s while playing lauded guest spots at San Francisco’s Wicked party, Fabric (UK) and forward thinking events like Japan’s Labyrinth Festival and Australia’s Rainbow Serpent. Following the path of his appeal as a DJ, his forays into producing have become staples for DJs of all styles. Three's recent remix of Mish Mash feat. Lois - 'Speechless' (Lost in Translation mix) for heavyweight UK label Crosstown Rebels received praise across the board while other productions under Second-Hand Satellites (Multiple Mirrors EP) and Three A.M. (remix of U.N.K.L.E. feat. Ian Brown - 'Reign') continue to be played on dance floors everywhere. Coming from the school of American DJs like Josh Wink and Doc Martin, Three has a wide ranging musical palate akin to Andrew Weatherall or Laurent Garnier, and was recently featured as part of DJ Times Magazine’s DJX20 Anniversary profile series as one of twenty DJs who embody the spirit of the American underground along such contemporaries as Josh Wink and Claude Von Stroke.

Bruno Pronsato (Live)
: Bruno Pronsato (aka Steven Ford) took several giant steps in 2005 toward the peak of the experimental techno mountain and hasn't stopped since. Both on vinyl and onstage, Pronsato kept up a hectic pace of production and performance, catalyzing listeners and crowds in Germany, Switzerland, Turkey, Mexico, throughout the United States, and a triumphant set at Montreal’s Mutek festival. Twelve-inches on esteemed labels like Orac, Musique Risquée, Milnor Modern, Philpot, and Telegraph further elevated his stature and built his international fan base. In addition to winning critical acclaim for his full length album "Why Cant We Be Like Us", he has also had releases on Perlon with his partner in crime Sammy Dee as Half Hawaii. A sound scientist whose work is equally playful and rigorous, Pronsato deploys a canny use of space and idiosyncratically fashioned rhythms to disorient and build suspense—like some 21st-century Miles Davis or Eric Dolphy of the laptop. Despite being a minimal-techno artist, Pronsato offers a palette that’s as full of unexpected patterns and meticulously rendered textures as a Wassily Kandinsky painting. Bruno’s compositions unsettle in original ways, yet they also slyly tickle funnybones. Often both humorous and erotic, his cuts are the wild cards that adventurous DJs pull out when they want to take the dance floor to strange new levels of motion. Therefore, Pronsato’s releases have become elite selectors’ secret weapons of beguilingly baffling quirkiness that still moves the dance floor.

Ben Parris (DJ set)
: currently lives in Baltimore and makes music for Foundsound Records. He is still looking for his laptop and midi controllers, having misplaced them somewhere in the Swiss mountains between the hours of 1am and 4am on July 29 of 2006. While these unfortunate events marked a tough ending to an otherwise stellar European tour in summer of 2006, Ben used the experience as motivation to start fresh, reformulating and improving upon his approach to producing dance music. January of 2007 saw the release of his second EP for Foundsound, “The Dumbest EP Ever,” featuring a remix by St. Louis’s Butane. Immediately following this release came another EP for the (un)Foundsound mp3 net label, featuring two original tracks by Ben and two remixes from Seth Troxler and Seph. Next for Ben came an EP on Goosehound by Benjaminz, a collaborative project between Ben and Sergio Giorgini, as well as remixes of Sergio Giorgini for Igloo records, and of Miss Fitz for (un)Foundsound. He also organizes an annual festival for electronic music and media (once.twice:sound), between duties as a teacher and PhD candidate studying the insignificant details and minute particulars of English Renaissance literature at Johns Hopkins University. He continues to dj and play live on a regular basis all over Europe and North America.

NavboX (DJ set)
: NavboX (aka Navid Zahraie) recently relocated from Boston to Washington DC after a triumphant four years at the Berklee College of Music where he studied production, composition, and engineering. NavboX has been destroying dance floors since 2001. He is well known for his delicate and outstanding approach behind the decks which has been sending audiences into freak and frenzy. This year Washington City Paper readers voted NavboX best DJ in the District in the Best of D.C. 2009 polls.

Email ThisBlogThis!Share to TwitterShare to FacebookShare to Pinterest
Labels: Stranger Than Paradise