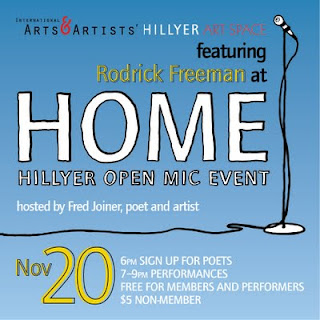 Hosted by Fred Joiner, curator and host of the American Poetry Museum's Intersections at the Honfleur Gallery and poet-in-residence at Busboys and Poets, Shirlington.

Rodrick Freeman aka Rod-zilla the Blackademic has been a staple in the international spoken word scene for the last five years. Originally from California, his dynamic performances have graced stages from Sacramento to Sydney, Australia. Heralded as the "hip hop griot", Rod-zilla stuns crowds with his creative natural realism, an abundance of alliteration, and a delivery that is authentically rich and transcendent. A true representative of the Black Arts movement this Blackademic has made it his duty to kill black male stereotypes with his scholarly work, proving that the myth of the black intellectual is not a farce at all. Equipped with knowledge of self and African conviction, Mr. Freeman has set out to be in the vanguard as a Pan-Africanist. His prolific body of work details the need for economic freedom in urban communities, holistic healing and black accountability while not sparing venomous critiques on the powers that be.

HOME is on every THIRD Friday of the month at Hillyer Art Space.