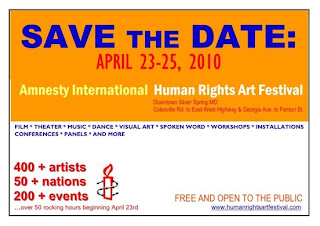 Join me and 400 artists during April in Silver Spring, MD
for the 1st ever Amnesty International Human Rights Art Festival
Festival Date: April 23 -25, 2010
plus
events and exhibitions throughout the month of April.
Check it out!! Make a date to come out to some great events.
The first ever Amnesty International Human Rights Art Festival comprises 400+ artists from 50 nations, producing more than 200 arts/advocacy events throughout 40 venues in downtown Silver Spring, over 50 hours in late April. As Larry Cox, Executive Director of Amnesty International USA, said of the event: “No human expression reaches into the soul, as does art. Since our founding, art and artists have played a powerful and central role in Amnesty International’s fight for human rights as a means to further our goals.”

ALL EVENTS ARE FREE AND OPEN TO THE PUBLIC.

Norman Lear (All in the Family etc., founder of People For the American Way) has signed on as Executive Producer of the Festival. In joining the endeavor, he sent along a note to Art Festival Producer Thomas Block that said: "I couldn't admire more your idea and plan for the Human Rights Art Festival."
Lear's first act as a member of the Executive Committee was to commission spoken word artist Steven Connell to create a work based on Amnesty International's postcard actions. Connell's work has been featured on numerous national television programs, as well as at Oprah Winfrey’s celebration
of Maya Angelou’s 75th birthday. He has also performed at private events for Hilary Clinton and Barack Obama.