G40: The Summit - This week of events 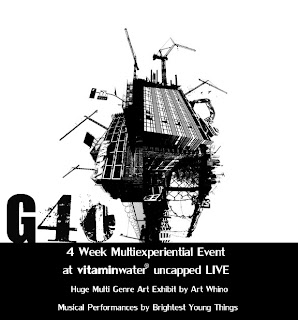 Saturday May 28th
DAYTIME: 3pm-8pm AWR presents: BBOY Battle 1vs1 for $300 more prizes to be announced! person who kills the cyphers most throughout the jam will get a special prize!
NIGHTTIME: ADVENTURE,The Nobis, DJ Rick Rabb of Food For Animals- $5 + DJs Matt Bailer + Bil Tod in the Garage

Art Whino returns in 2011 for the second edition of G40. The first G40 art summit in 2010 compounded artistically explosive cultures from all over the world and brought them to the DC metro area. By bringing all of these cultures from throughout the world to one place it allowed the visitor to be fully immersed in over 2000 works by 500 artists organized by floors corresponding to their cultural hubs.

This year G40 explores not cultures but the genres which are on the forefront of creative transitions and growing in large scale with hundreds of thousands of fans throughout the world. Some of these genres include Customized collectibles, Skateboard Art, Stencil, Wheat Paste and 3D Installations.

The G40 Art Summit is a unprecedented experience in the art world with its scale and caliber of artists from around the world. This year the summit comes to the city next to the U street corridor taking over an entire 25,000 sqft building and showcasing art on all of it 4 floors.  From over twenty artists showcasing 16’ Murals to traditionally displayed artwork the summit will definitely have sensory overload requiring multiple trips to take in all the treats for the eyes.