After teaching a morning watercolor class and getting imput on a mural design this afternoon, I decided to go check out what G. Byron Peck was doing at Hotel Palomar, a new boutique hotel under construction and opening this Spring on P Street NW in Washington, DC. 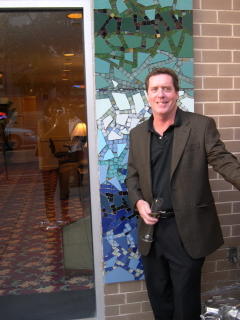 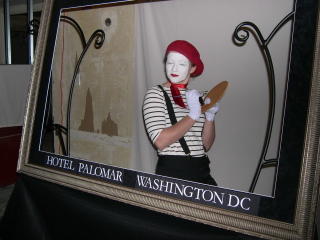 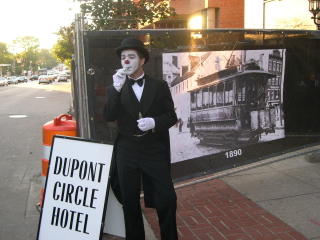 G. Byron Peck is always doing cool things in the community. He runs City Arts, Inc., a non profit org. that works with inner city children to train them in mural and mosaic arts. Byron and "his kids" are all over the city creating mosiacs and murals to liven up the community. Tonight the kids were serving up "hard hats" that they painted 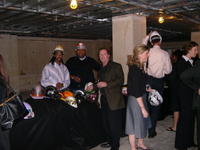 in bright designs for a press preview at Hotel Palomar. Seems like Kimpton Hotels has a catchy new concept, Art in Motion, to connect their latest hotel offering with the local community. G. Bryon Peck has reproduced seven of his murals on scrims that are displayed in front of the hotel site on P Street NW.
You can see them when you drive or walk by the hotel site. 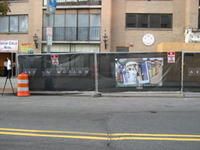 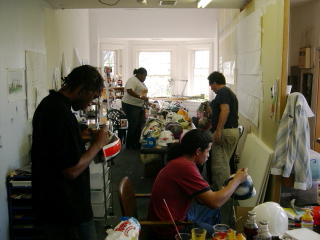 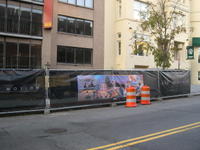 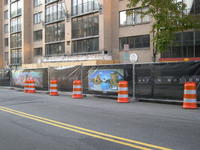 This may be your only chance to see some of the images since the original murals are located in government buildings. Byron's students created a bright mosaic design that flanks three surfaces around the hotel entrance door. That's Byron in the first picture standing in front of the mosaic.

I went to the press reception and was escorted up to the model hotel room with members of the press. 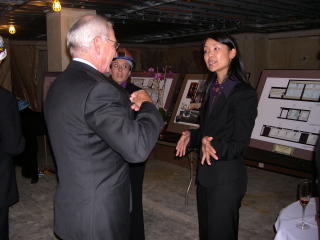 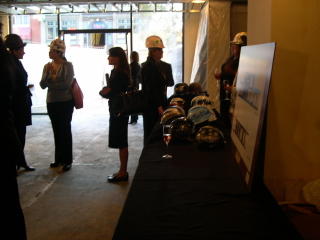 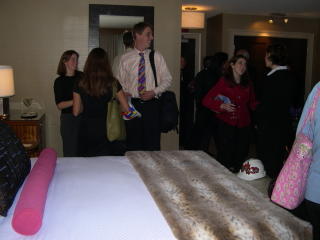 The furnishings were luxurious and the room spacious. We were told we could buy, not steal, the faux leopard throw for $625. (ha ha) And I'm not sure where to put the decimal point. Alas, the staff didn't know that I am press, writing for my art blog, Painterly Visions. I forgot to include that in my introduction. An annoucement was made in the model Hotel Palomar room, to enjoy ourselves and we would all receive a gift bag when we left. Being infantile when it comes to gift bags, I saw the table of gifts as I was leaving and asked the escort, could I take one? She showed me the door. So much for Art in Motion, I got bagged. No gift bag!

Kimpton Hotels is turning to the arts community to differentiate themselves in the DC marketplace and their Arts in Motion is an innovative inclusion of the arts in their marketing efforts. Other Kimpton Hotels in Washington, DC include Capitol Hill-Hotel George, Logan Circle-Hotel Helix, Dupont Circle-Hotel Madera & Topaz Hotel, Penn Quarter/Downtown-Hotel Monaco and Embassy Row-Hotel Rouge.

I will write more on G. Byron Peck and his incredible gift of monumental art. Byron will be one of twenty five Mid City Artists who's studios are open next month on November 12 & 13 during the Annual Mid City Artists Open Studios in Washington, DC USA. Go to www.peckstudios.com/ to see more of G. Byron Peck's work. Don't miss him!

www.cityartsdc.org/
City Arts, Inc. was founded in 1997 by G. Byron Peck with a mission to enhance and maintain the visual quality of the District of Columbia's urban landscape; to provide inner-city youth with creative alternatives to destructive behavior; and to advance education, awareness, and appreciation for the visual arts. City Arts creates large-scale public murals with the assistance of talented DC youth. A special effort is made to recruit students who live in the neighborhoods where the art works will be featured.