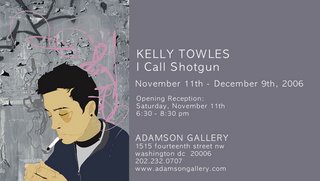 I peeked in the gallery on Wednesday. Kelly wasn' t there but his signature art was taking shape on the walls. The gallery walls were being painted with mythical figures and graffiti like images by the artist. I hope to see the entire exibition next week.

"Adamson Gallery is pleased to present “I Call Shotgun”, an exhibition of new pigment prints from Kelly Towles. The incorporation of Towles’ fantastic subjects into a photographed landscape of back alleys and brick walls renders the work a documentary project of sorts; a world in which graffiti springs to life.  Towles will also be painting the walls of Adamson Gallery, transforming it into an extension of this alternate universe, where the imagined becomes real and the grotesque becomes beautiful.

Towles’ subjects are paradoxically familiar and strange. A large rat sits in front of a boarded up door, chewing his own tail. The rat’s environment is photographed, and seems familiar. In proportion and stance, he rat resembles a nature study in its realism. However, upon closer examination, he seems almost patchworked, as lines crisscross his face and body and he is colored in shades of peach. Behind him, on a brick wall are vivid graffiti scribbles, emphasizing this bricolage of life and fantasy. In form and surroundings, the rat seems real, but color and composition render it incredible. Towles’ striking image juxtaposes the actual and the imaginary: some aspects of the artist’s work resemble nature while others indicate an alternate reality.

Also arresting is Towles’ mixture of subjects: while some are mimetic humans and animals, others are more like animated characters or Frankenstein hodgepodges: a fox with the arms of a mummy and a single, dainty leg, an eyepatch wearing schoolgirl wielding a boxing glove and a hook, and a demon sporting a monocle and a pink plaid vest. Each work is rich in imagery, the different features of Towles’ characters suggest narratives, but none are provided. All are pictured without context, suggesting that the viewer make his own.

The similarity of the photographic backgrounds, which suggest a desolate industrial environment, suggest that Towles’ subjects share their world. The anonymity of these spaces, which could be in any alley in any city, implies a familiarity to the audience. As Towles work is extended into the physical space of the gallery, the viewer is placed in a position between reality and image."