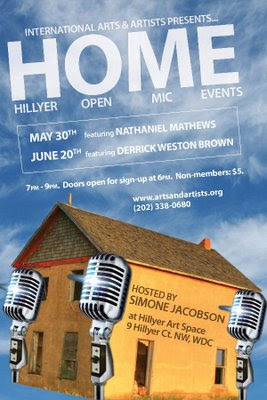 Starting on June 20th, HOME events will always take place on third Fridays. Each month a featured poet will be joined by 6-8 other local poets who may sign up at the venue beginning at 6pm the evening of the event.

This Friday will feature poet and visual artist Nathaniel Luke Mathews, whose work has been featured on the campus of Howard University and local venues across the city. Through his writing Mathews explores spiritual topics from multidimensional angles. He draws inspiration from historical figures like John Brown, Saul Alinsky, Shirley Chisolm, Jesus, and the Prophet Muhammed. His poetry is also influenced and inspired by that of Sekou Sundiata and Jalal ad-Din Muhammad Rumi.

This event is free for members and $5 for non-members. Proceeds go towards supporting Hillyer Art Space's Local Artist Series and accompanying programs.

* Any poet interested in signing up to perform should plan on arriving between 6-7pm.